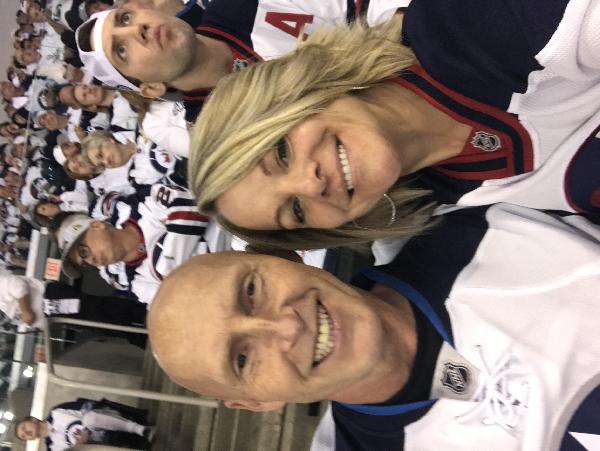 When the Winnipeg Police Service Half Marathon was in its infancy, our goal was to host a terrific race and to make a difference. Since then we've created a legacy of giving that will cross the $2 million mark this year.

But what each of us really wants to know is: Does our fundraising efforts really make a difference?

As we were kicking off our 15th Anniversary Foodfare Winnipeg Police Service Half Marathon we got a real taste of the difference we've made.

Here was a guy who we had funded announcing a major breakthrough in the fight against one of the toughest cancers we know. Glioblastoma kills 90% of the time. It has taken US Senator John McCain, Tragically Hip front man Gord Downie and our own Joanne Schiewe.

After years of work, Health Canada has approved clinical trials to test and validate the imaging probes Dr. Geyer's team have developed. Testing on the first cancer patients could begin as early as June. Dr. Geyer called the breakthrough significant because at the very least the process to highlight cancerous tumours help others with glioblastoma live longer and better yet, it could save their lives.

It was such a proud and humbling moment. We did this. You did this. Through every dollar we raised, we enabled this research.

The media assembled to cover the WPS Half Launch looked stunned and then they realized just how significant this was. They kept Dr. Geyer busy answering questions for more than 40 minutes after the news conference ended. Just look at the results of their reporting.

Usually treated with surgery followed by radiation and chemotherapy, most glioblastoma patients are only given 12 to 24 months to live. Surgery is difficult because glioblastoma cells are often studded with a protein called EGFR which plays a role in the disease's aggressiveness and resistance to treatment.

With the support of WPS runners, the Canadian Cancer Society provided Dr. Geyer a $200,000 grant which was matched by Brain Canada. The financial support helped his team finish developing an imaging agent that can be injected into the patient just before a procedure. This agent emits light helping doctors better distinguish cancerous tissue from healthy tissue. By looking for clusters of EGFR, doctors can locate a brain tumour and see its defined borders.

Why is this important? Because nearly 100% of the time, glioblastoma returns and kills because surgeons don't get all of it the first time. This imaging agent will make brain tumour identification easier and surgeries safer and more effective.

This is what we run for. Better outcomes for cancer patients, more time with families, lives saved. When we run, we demonstrate that life is bigger than cancer.

My funds raised so far

View people that have helped by sponsoring you.

The donation period has ended for this fundraiser.

Be Inspired, challenge yourself. Pick an event goal for yourself.

Let our team of experts answer your every question.

built and powered by Commer

Before creating a race, you must first login if you have a profile or set up a profile.

One you are logged in you will then be redirected to the Race Form afterwards.