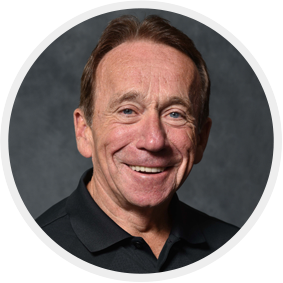 President and Founder of the Running Room
Author of 10 books on Running, Walking & Family Fitness

A three-kilometre fun run with his sons in 1981 was the catalyst for the then-out-of-shape, overweight John Stanton to realize he had to change his lifestyle. A food industry executive who smoked two packs of cigarettes a day, he began running secretly before dawn because he felt self-conscious about having his neighbours see "this chubby little guy" who could only run from lamp post to lamp post before having to take a walk break.

John went on to run over 60 marathons, hundreds of road races and numerous triathlons, including the Hawaiian World Championship Ironman competition. His pre-dawn runs would ultimately become John Stanton's 10:1 run/walk combination that has helped close to a million people do everything from learn to run to complete marathons, upright and smiling.

The first store was a meeting place for runners. It opened in 1984 in an 8 x 10 foot room of an old house shared with a hairdressing shop in Edmonton. More than 25 years later, the Running Room is one of North America's most recognized names in running and walking. John's two sons, John, Jr., and Jason, are now partners with John in the family-owned company, which has more than 120 stores and 1,300 employees in Canada and the United States.

A best-selling Canadian author of 10 books on running and walking, John Stanton was named to Macleans magazine's Canada Day Honour as one of 10 Canadians who are making a difference in our nation, for his contribution to health through fitness. John Stanton is a member of the Alberta Business Hall of Fame. He is a recipient of the Dr. Harold N. Segall Award of Merit, which recognized his significant contribution to the prevention of cardiovascular disease and the promotion of cardiovascular health in Canadians. The Canadian Medical Association awarded him the Award for Excellence in Health Promotion. He is the Hon. Lt. Col. of the Loyal Edmonton Regiment (4 PPCLI) and an inductee into the Canadian Retail Hall of Fame. John received an honorary Doctor of Laws Degree from the University of Alberta. His is a member of the Order of Canada.

John is regularly featured on CBC, CTV and Global Television, in the National Post and the Globe and Mail, as well as, numerous radio and television programs across Canada and the United States.

An outstanding entrepreneur, with a keen interest in the health and wellness of both Canadians and Americans, John Stanton possesses a remarkable ability to inspire others and to build community.

Be Inspired, challenge yourself. Pick an event goal for yourself for 2021.

Let our team of experts answer your every question.

built and powered by Commer

Before creating a race, you must first login if you have a profile or set up a profile.

One you are logged in you will then be redirected to the Race Form afterwards.